Then when I was 18 I read Lucy Rees’ book Riding:The True Techniques. This book had a huge impact on how I rode and my relationship with my pony, not least was a photo of a boy on a pony in a Bitless bridle and the caption ‘some ponies are sensitive and don’t need a bit’ The lightbulb went on, I just had to try it.

I didn’t have a bitless bridle, they weren't available back then, but looking at the photo in the book I saw it was a noseband with reins attached, that I did have. So fitting a drop noseband higher, where a cavesson should sit, and attaching reins to the rings I set off for a ride. I didn’t have a nice arena to try it out in, or even a corner of a field so we went straight out onto the bridleway.

After about 5 minutes of walking my pony gave the most enormous sigh and became very soft and relaxed. I remember thinking ‘Wow, what just happened?’ I didn’t even realise that my pony was carrying any tension. He certainly hadn’t shown any tension or had any issues with a bit, but this felt like a whole new way of going. 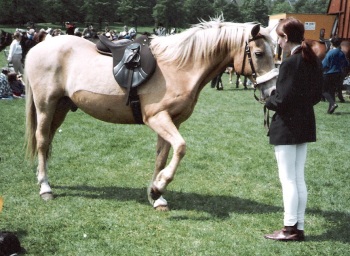 I continued to ride him bitless for the rest of his life, graduating from a drop noseband to a simple nose strap I made and attached to his bridle. We continued to attend our local riding club and compete at all our local shows. The only comment I ever received was the first time I went to the riding club and was asked where my bit was. Me, being a cheeky teenager, exclaimed in a shocked voice that ‘Oh No, it must have fallen out on the way!’ I was told off for being cheeky, but they never asked again or insisted that I use a bit. 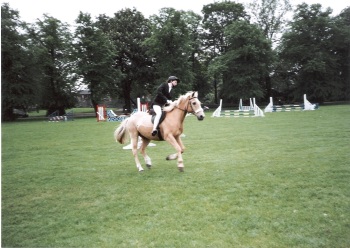 I have a lot to thank Paladin for, he was a great pony, but not always an easy one. He taught me to have an independent seat. He had perfected the art of, when jumping, to take off but then spin and drop his shoulder halfway if he felt that someone wasn’t right. I don’t know how I didn’t get injured the number of times I landed amid poles. Equally he was very good at refusing too. There were many occasions that I hacked several miles to a show to be eliminated at the first fence, equally we won a lot too and competed against some good horses. But he definitely showed me that bitless was possible.